Determine the GitHub repository from the working directory

Lately, I have been playing quite a bit with console applications. There are a couple of reasons for this. Firstly, I want to get a better understanding of developing .NET Core Global tools.

Secondly, I have grown pretty tired of web applications and the craziness and constant turmoil which is the JavaScript landscape, so I decided to go back to basics: developing simple console applications. Yep, that’s right. While the cool kids are going crazy over Angular, React, Webpack and who knows what else, I have decided to go the opposite direction.

The first project I am tackling is a CLI for listing and managing GitHub issues from the command line. I have no idea if there is a need for something like this, but it sounded like an interesting problem, and that is my primary motivation at the moment: to solve interesting problems.

The GitHub API has an endpoint which allows you to retrieve all issues for the authenticated user, and that works great in my application: 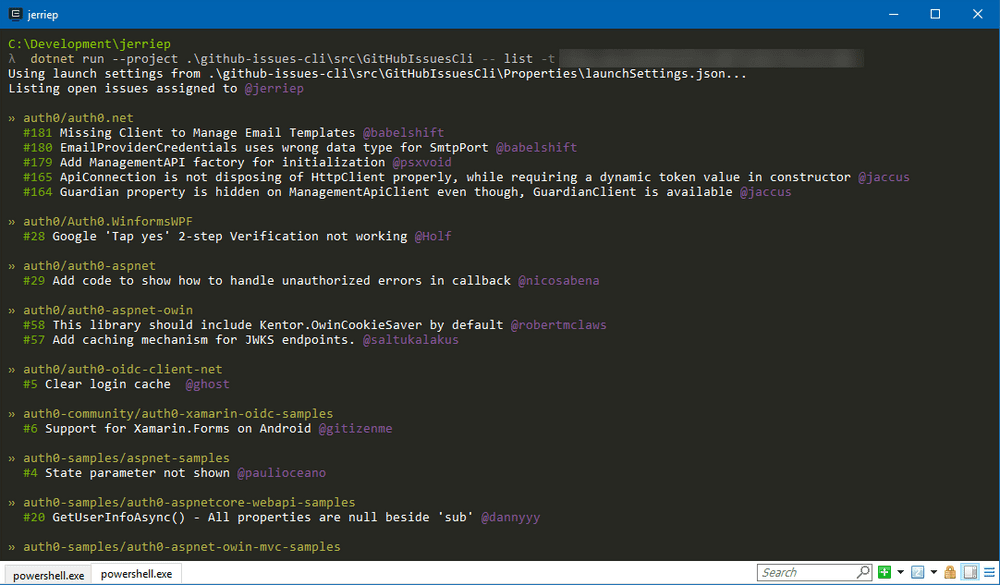 But, when a user is running the CLI from a folder which is part of a Git repository, and that Git repository is hosted on GitHub, it makes more sense to list the issues for that GitHub repository rather than for all repositories.

Get the GitHub remote for the current directory

The first issue I needed to solve was how to determine whether the current folder is part of a Git repository. Thankfully, the libgit2csharp project came to my rescue as it has all the necessary functionality for this.

Ensure you install the NuGet package:

Then, you can call the Discover method of the Repository class, passing the directory:

Now that you have the path to the repo, you can create a new instance of the Repository class, passing that path:

The new Repository instance has lots of information about your Git repo, one of which is the list of remotes. We can query those to look for the remote GitHub repo.

In the sample below I just grabbed the one named origin, but you should probably do something more fault tolerant. For one thing, it may not be called remote, and also there may be multiple remotes, and not all of them are hosted on GitHub.

Clean up the URL

I want to use the Uri class to parse the URL, but if I pass it a URL like git@github.com:jerriep/github-issues-cli.git to the Uri constructor, it will throw a UriFormatException stating that the URI scheme is not valid.

With that done, I will end up with a nice looking URL using the HTTPS scheme which the Uri class understands.

Get the user and repo

All that remains is to look at the AbsolutePath of the URI which, in my case, will be jerriep/github-issues-cli and split it at the \ which will give me the owner and the repository name.

Retrieve the issues for the repo

I have everything in place to call the endpoint to list issues for a repository. I’ll be making use of octokit.net, so here’s what that code will look like:

And with that in place, when I run my CLI from a folder which has a GitHub remote, and that remote contains issues, I will see the issues displayed on the screen: 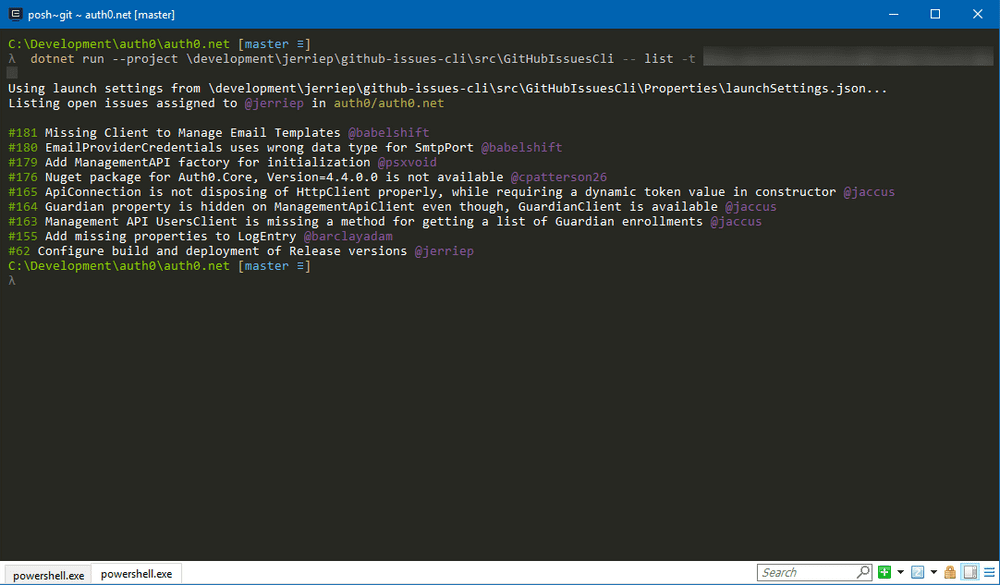 You can have a look at the source code for my GitHub Issues CLI if you want to see more details of how this application is implemented.

Also, at the time of writing this blog post on 11 April 2018, the actual CLI is not yet available to be installed. I will publish it at a later date once it is finished.