ASP.NET has had its share of membership systems over the years and with the latest release of Visual Studio 2013 and ASP.NET MVC 5, Microsoft has introduced a new system yet again referred to as ASP.NET Identity.  For a good overview of ASP.NET Identity and Microsoft’s rationale on developing yet another new identity system for ASP.NET, please go and read the post entitled Introduction to ASP.NET Identity by Pranav Rastogi.

ASP.NET Identity comes with full support for OAuth and OpenID login providers, and provides for the ability to log in using Twitter, Facebook, Google and Microsoft accounts out of the box.  This process is described in more details in Rick Anderson’s blog post Create an ASP.NET MVC 5 App with Facebook and Google OAuth2 and OpenID Sign-on.

This blog post assumes that you have already registered your application on the Twitter developer website and have the Consumer Key and Consumer Secret available.  If not, then please hop on over and do it now.

First off we need to enable the Twitter authentication provider in the Startup class.  This is usually done by adding the following line:

For our purposes however we need to expand on the registration of the Twitter authentication provider by adding an OnAuthenticated callback delegate:

The OnAuthenticated delegate will be called by the Twitter provider after successful authentication and provide a place where the Twitter access token and access token secret can be retrieved.  These are then added as claims to the ClaimsIdentity which is available as Identity property of the context variable.  Note that we are prefixing the type name of the access token related claims with “urn:tokens:” as this will make it a bit easier for us to retrieve them later on from the list of claims.

This is however only part of the solution, and to have the token and secret available for future reference they will need to be stored in the database.

The way the normal authentication flow works in ASP.NET MVC 5 is that when you log on using a social media account such as Twitter, the AccountController will check to see if a user is already registered against that Twitter account.  If the user is registered they simply get logged on, but it it is the first time they log on they will be prompted to supply a user name.  Upon completion of the user name form, a postback will happen to the ExternalLoginConfirmation() method on the AccountController class.

What we need to do is to add code at this point which stores the claims containing the Twitter access token and secret and store it against the user profile in the database.  The first point is to create a new method to retrieve and store the tokens:

In line 4 we retrieve the ClaimsIdentity so that we can access the claims which were added by the Twitter authentication provider in the OnAuthenticated callback delegate.  Line 10 retrieves the existing claims which is stored for the user as we want to check against these and only add them if they do not already exist.  Line 13 grabs the list of access token related claims - remember that we prefixed them before using “urn:tokens:” as we are only interested in storing those particular ones in the database.  Lines 17 - 23 iterates through the list of access token related claims and if they do not already exist for the user we store them against the user in the database by making a call to UserManager.AddClaimAsync() method.  The call to UserManager.AddClaimAsync() will store the claim in the database table called AspNetUserClaims, and because of this we can easily retrieve them at any time again later.

Of course we need to call this method, so simply alter the relevant lines in the ExternalLoginConfirmation method of the AccountController class:

Ensure that you call the method after the user has been created and the login has been associated against the user., but before you sign them in and redirect them.

To retrieve the claims from now on is as simple as adding the following lines of code:

I promised you that we will retrieve the Twitter profile image for the user and so far we haven’t done that.  The ground work has been laid however, and downloading the profile image from Twitter is all that remains:

Lines 4 + 5 simply retrieves the claims for the Twitter access token and secret.  On line 10 create an instance on the TwitterService class passing in your consumer key and secret, as well as the access token and secret which was retrieved from the claims.  (The TwitterService class is from the TweetSharp library which I installed via Nuget).  Line 17 makes the call to Twitter to retrieve the user profile.  The TwitterUser class which is returned by the call to GetUserProfile() contains a property called ProfileImageUrlHttps which is the URL to user’s profile image.  The rest of the code simply calls another helper method which downloads the image from the URL and saves it in a folder call “/ProfileImages/” with the same file name as the user’s id.

A call is added to this method in the our StoreAuthTokenClaims method from above:

Just a quick note before I carry on. Even though I stated before that you retrieve the claims from here on in from HttpContext.User.Identity, at this specific point we cannot do it as user has actually not been signed in yet, so we just pass the claims we retrieved before to the DownloadTwitterProfileImage() method.  Once the user has been signed in however (which happens just after we have stored the tokens and retrieved the image), your will be able to access the claims from HttpContext.User.Identity.

So, now that the profile image is downloaded to the server, all we need to do is display that image for the logged in user.  For that I add a small piece of HTML to the _LoginPartial.cshtml partial view.

And the final product is below with the user profile image displayed.  Since we store the OAuth token and secret we of course have access to the entire Twitter API, so in the screenshot below you will notice that I also retrieve and display the list of tweets from the user’s Twitter home timeline. 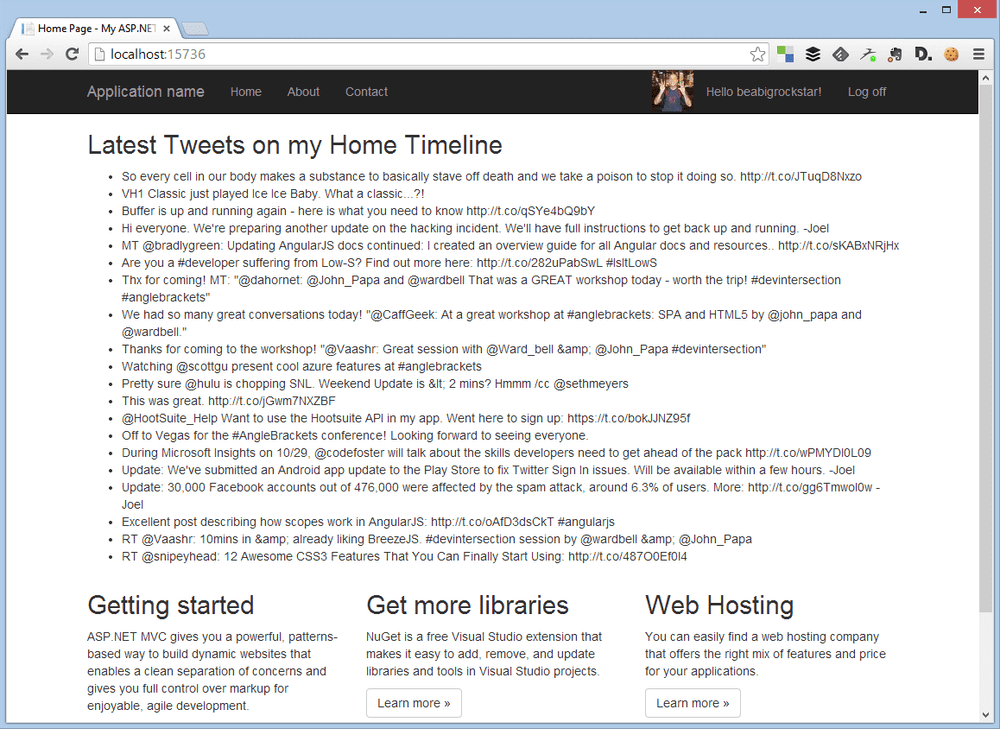 Be warned: this is not production quality code!.  There are a lot of places where things can go wrong and a lot of stuff which I hard coded.  This code was written to demonstrate one single concept.  Use it it your own systems as you wish, but it is up to you to make the code rock solid.

You may also have noticed that the solution provided above has a number flaws, and you will need to fix those on your own.  Off the top of my head, here are a few things you will need to think about:

There are quite a few parts to this solution and building it up progressively over the course of the blog post may leave you a bit confused.  Best is to have a look at the source for the complete final solution.  The relevant parts are: