How ASP.NET 5 determines the culture settings for localization

I am using Beta 8, and have created a simple web application using the ASP.NET 5 Yeoman generator.

The first thing you will need to do is to enable the Localization middleware inside your application. For that you can head over to the Configure method in the Startup.cs file and add a call to the UseRequestLocalization() method.

Enabling the middleware is as simple as that. But let us look at how it works…

How the Localization middleware sets the culture

To understand how the Localization middleware works we can look at the source code on GitHub, specifically the Invoke() method of the RequestLocalizationMiddleware class:

The middleware first determines the default (or fallback) culture if all other methods fail. By default this is the culture settings of the current thread, but you can override that by specifying a default culture in the RequestLocalizationOptions which you can optionally pass to the UseRequestLocalization() method (we will look at how to do this shortly).

For more information on how the culture info for a thread gets determined, you can refer to the “How a Thread’s Culture Is Determined” section in the MSDN documentation for the CultureInfo.CurrentCulture property.

Now you may wonder what the possible Request Culture Providers are. For that we can head to the source code for the RequestLocalizationOptions class, and in the construcutor we can see the possble providers being specified.

So with that knowledge, here is the order in which the correct culture gets determined (in order of priority):

So the query string always takes the highest priority, then the cookie, then the Accept-Language header, etc..

Using each of the methods

This would not be a complete blog post if I stopped right there. We need to look at how you can use each of these in your application, and for that I am going to start with the lowest priority one, namely the thread culture, and work my way up to show you the effect of each.

I have changed the source code for my Index.cshtml file to simply display the Current Culture and Current UI Culture:

So lets look at each of those methods in more detail.

As stated before, this is the default option when all else fails. The thing is however, that I cannot really demonstrate this in a browser, because the browser is going send an Accept-Language header, and I do not what that to override the default behaviour. So to demonstrate this correctly, I am going to use the CURL command from Windows PowerShell and display the raw content retrieved:

When I run the command I can view the raw HTML: 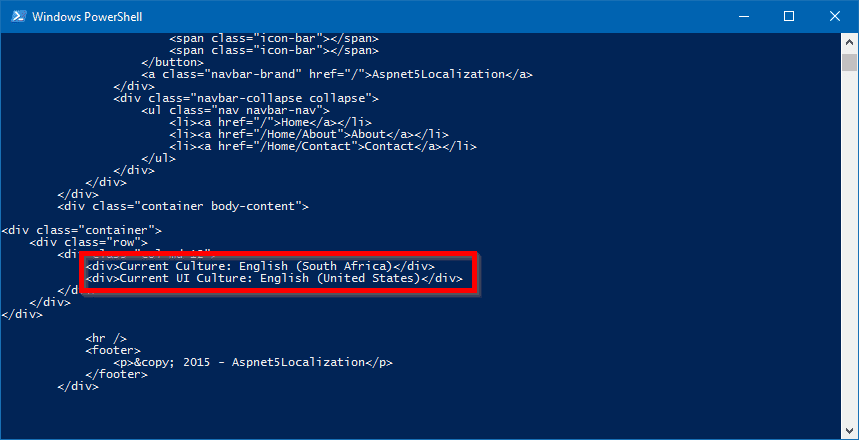 The first way we can override the culture settings is by setting a culture using the DefaultRequestCulture property of the RequestLocalizationOptions. So let’s change the call to UseRequestLocalization and set “en-US” as the default culture:

Now doing the PowerShell CURL magic, we can see that both the Culture and UI Culture is set to “English (United States)“. 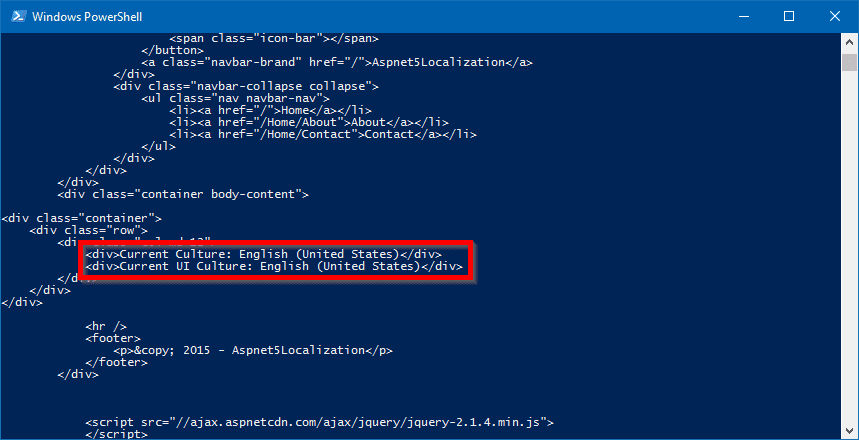 Next up is the Accept-Language HTTP Header, so for this one we can head over to the browser. I am using Google Chrome and this is what my Google Chrome Language settings looks like: 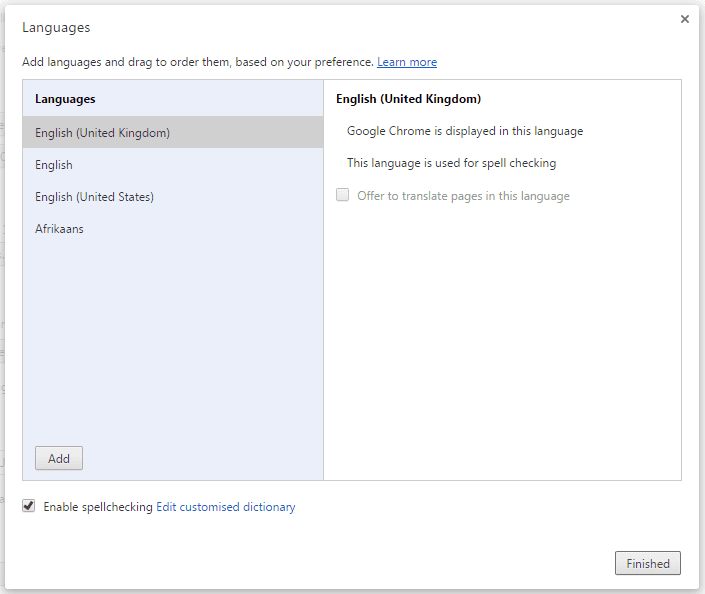 And if I go to the web page in my browser, you will see that Chrome sends the language settings in the Accept-Language HTTP header, and you can see the resulting page display “English (United Kingdom)” as the culture: 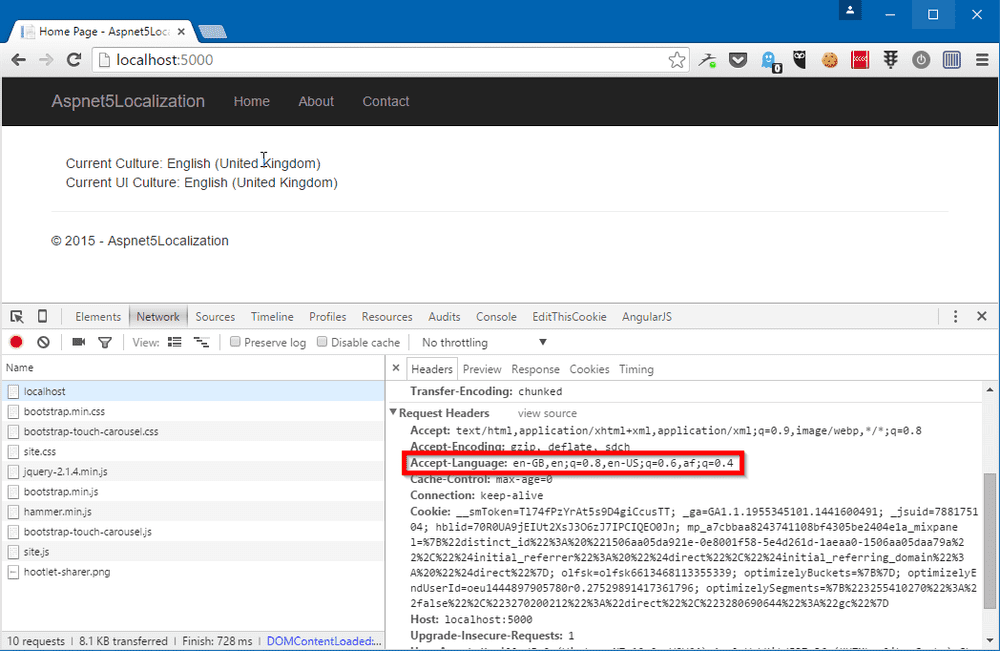 The Localization middleware can also look for a cookie which is set. The name of the cookie it is looking for is ASPNET_CULTURE and you can pass the values for the Culture and UI Culture using “c=

Note that it is important that you set both the culture and the UI culture. You can set them to different cultures but you must set a value for both, otherwise the culture will not be overridden. This is currently the case in Beta 8, though that may change in the future.

So I use a Chrome Plugin called EditThisCookie to manually set the cookie value: 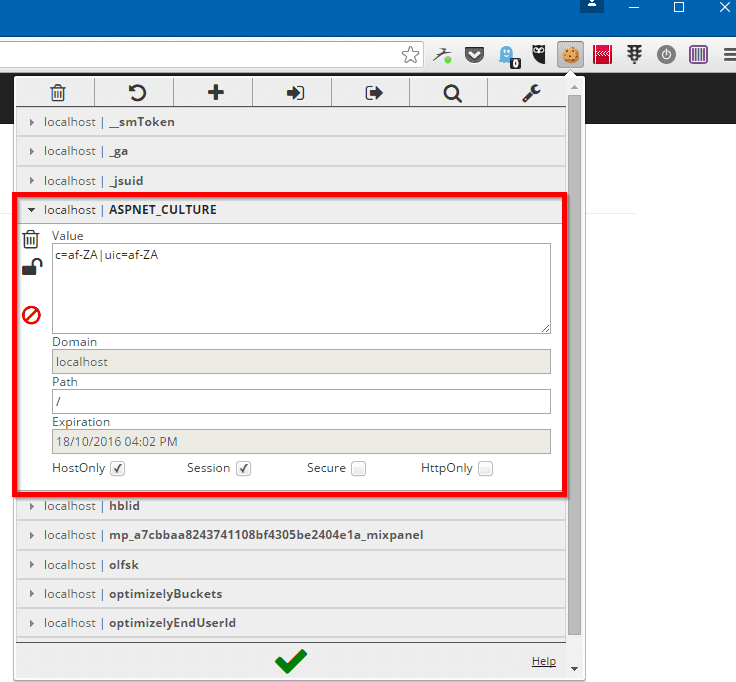 And when I refresh the page you can see that both the culture and UI culture is set to “Afrikaans (South Africa)“. 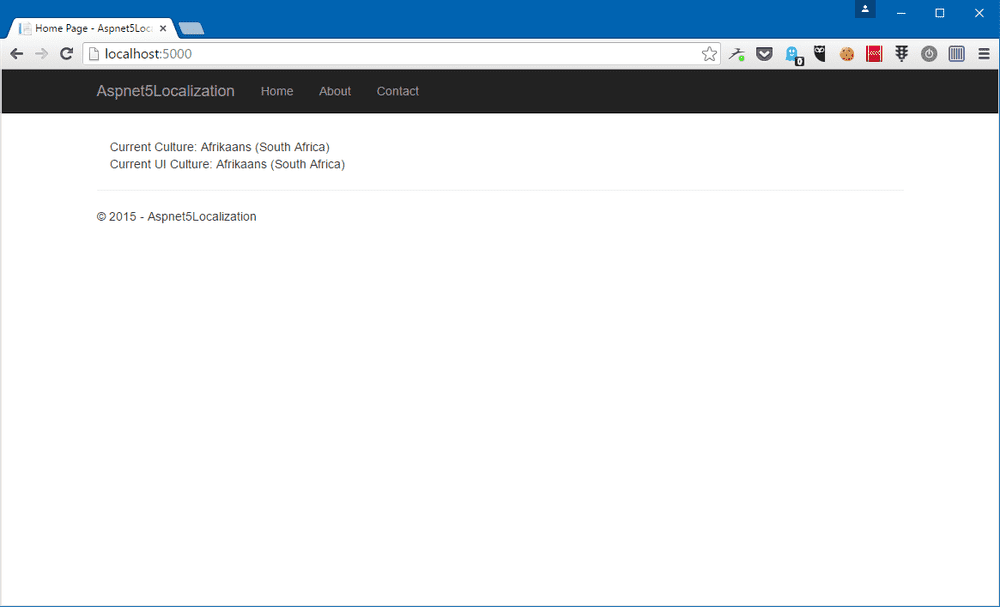 Passing the culture in the query string

And that will result in the following: 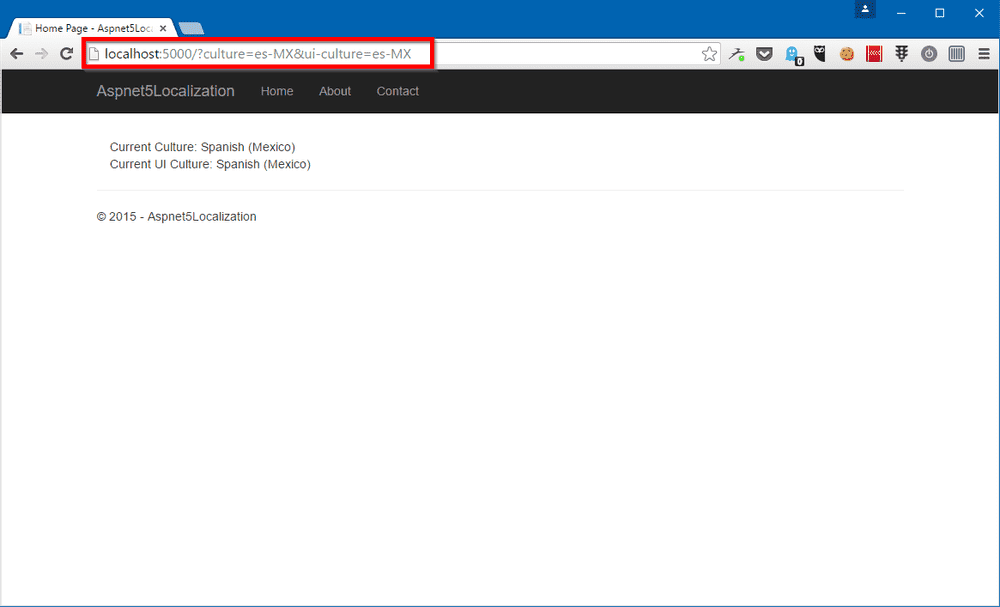 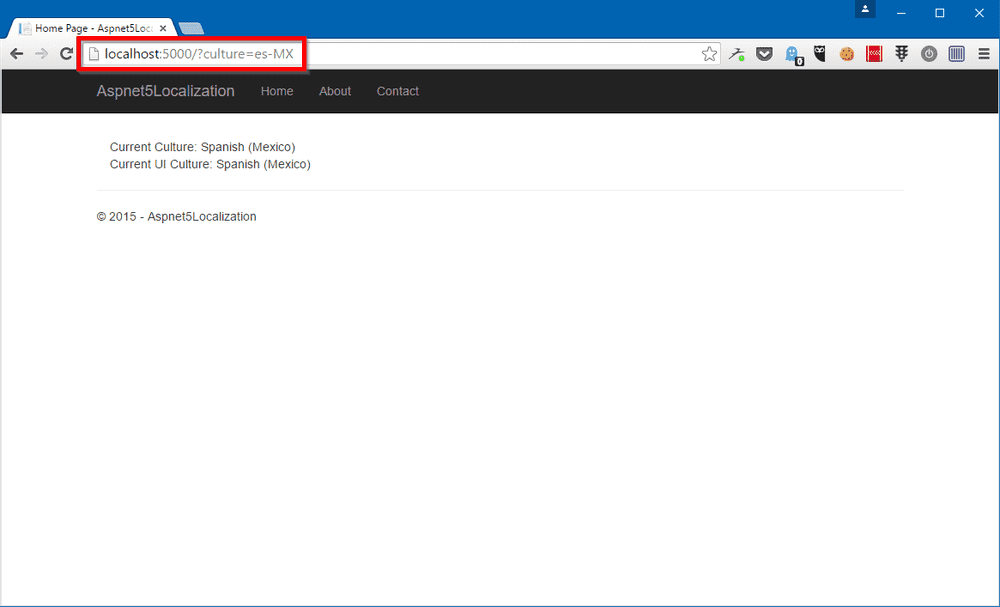 It is strange to me because this behaviour is different from the Cookie provider which requires you to set both values. Maybe this is intentional, maybe it is not, but I find the inconsistency confusing. I have logged an issue on GitHub regarding this, so hopefully they make it consistent across both these providers.

In this blog post I showed you how the Localization middleware in ASP.NET 5 determines the correct Culture for a request.

You are also free to swap around the order of the providers, so that the Cookie provider for example always takes highest priority. You can even remove some of the providers altogether. It’s up to you how you want to handle this. What I demonstrated is the default behaviour.