I recently bought a Lenovo X1 Carbon (5th Generation) and after spending a little over a week with it, here are my initial thoughts of it as a software developer using Microsoft tools such as Visual Studio.

Before I start diving into my thoughts of the Lenovo X1, I want to spend a little time on my requirements. I am a software developer using primarily Microsoft tools such as Visual Studio and Visual Studio Code, as well as 3rd party IDEs like JetBrains Rider. These sort of tools aren’t exactly lightweight, so I require at least 16 GB of RAM, as well as a 512 GB of SSD.

Beyond that I travel a lot, which brings a number of requirements for me:

I am also constrained by what I can get a hold of, at a reasonable price, in Bangkok. Yeah, Bangkok is a shopping mecca, but for some strange reason, finding laptops with 16 GB of RAM is not as straightforward as it would seem.

Looking at my options

I first looked at the new Macbook Pro, because in my experience it is very good and reliable hardware, and you can find parts and service centres for them most places on the planet, it seems.

But I just can’t get past the fact that it does not have physical function keys. IDEs such as Visual Studio and Jetbrains Rider have a lot of shortcuts configured which make use of function keys, and not having physical keys which respond to pressing them would have frustrated me endlessly, I think. Given the price of a Macbook, it would be an expensive mistake to make, so it was not worth the risk buying it and ending up being frustrated by it every day.

Next, I looked at the Dell XPS range. The 13 inch felt a little bit small for me, but the 15 inch felt just about right. Also, these Dells have proper desktop grade HQ series processors, while most of the competition have the U (Ultra Low voltage) processors which does not perform as well.

Another option available to me was the Lenovo Yoga 910. The reviews I read about this one was very positive, though some people seemed to complain about fan noise. Also, the Yoga 920 is just about to be released, so I am a bit weary to buy a notebook which is already a generation old.

I was curious about the Lenovo X1 series, but I have never seen these in shops in Bangkok before. Then, while enquiring from Lenovo Thailand when the Yoga 920 would be available locally, they referred me to a local reseller named Blue Shop in Fortune Town by Rama IX.

Turns out that this particular reseller is catering specifically for the corporate market, and as such they carried the more professional lines on Lenovo laptops, including the X1 Carbon and X1 Yoga series.

These come with a 3 year warranty, and also great service due to the fact that they are business laptops. This was a big plus for me.

The only downside is that they import a number of pre-defined configurations, and you cannot configure the computer exactly as you like. Which is OK, I guess, as it means you can get it immediately instead of waiting for weeks for it to ship from the US.

So weighing all my options, I decided to go for the X1 Carbon with Core i5 (7300U) processor, 16 GB RAM, 512 GB SSD and 1080p matte screen. I would have liked the Core i7, but it was not offered by them in a 16 GB configuration. The X1 Yoga was offered with i7 / 16 GB / 256 GB, but I did not like the highly reflective screen. And then there’s also the fact that I would have to deal with Windows’ notoriously bad scaling for HiDPI displays.

My thoughs so far

So with that long preamble out of the way, what do I think of the Lenovo X1 Carbon so far?

Bottom line, I love it - though it is not without issues.

I have never worked on a Lenovo before, so I have only heard about their great keyboards. Now that I am using it, I can say that this is hands down the best laptop keyboard I have ever worked on. It really is something special. And seeing as I type a lot, this is a great attribute for any laptop to have.

Some reviewers have complained about the odd placement of the Ctrl key. However, this is exactly the same placement I am used to on the Macbook Pro, so it does not trip me up at all.

I also appreciate that the keyboard has proper Home, End, Page Up and Page Down keys. Again, some of the Resharper and Rider shortcuts I am used to are bound to these keys, so having them available as dedicated keys are great.

I am still getting used to the layout of the keyboard, and therefore still making mistakes, but over time this will work itself out.

Wow, this thing is small and light. It is small enough to be convenient to carry around everywhere, but not so small that it feels too cramped to work on.

It 1.13 kg (2.49 lbs) it is so light that I have literally had to check my backpack a few times to make sure the laptop is still inside and have not fallen out.

The SDD on this laptop is super fast. That, along with the 16 GB of RAM, results in a very pleasant experience using Visual Studio (with Resharper) and also Rider. As mentioned, I would have preferred the Core i7, but so far it does not feel as though the slower processor is tripping me up. 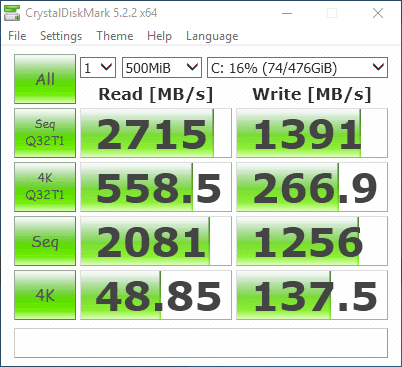 It is certainly much faster than the SSD which was in my Surface Pro 4, and I have seen some reviewers compare it to the speeds of the latest generation Macbook Pro.

I have not been able to test the battery lifetime yet. Will update on this, once I have had time to test it properly.

As mentioned, I went for the normal 1080p matte screen. It is nothing to write home about, but it fits my requirements well. It means I don’t have to stuggle with reflections on the screen, I don’t have to deal with HiDPI scaling issues, and it means a longer battery life.

If you are into photography and stuff like that, then you may want to consider upgrading to the WQHD screen, or get the X1 Yoga with the OLED screen which Paul Thurrott is raving about.

The trackpad is OK - if you’re coming from a Macbook. If you are coming from other Windows laptops, then you will probably find it amazing. I mostly use the Logitech MX Anywhere 2 mouse in any case. When I have had to use the trackpad it worked great. Except for a few times when it registered a tap (for a click) when it was not my intention.

I am not used to the Trackpoint, so I am probaly not even going to bother using it and trying to get used to it.

I have picked up on a few issues though.

I have been traveling the past week in Chiang Mai in Northern Thailand, and had issues with the WiFi at the hotel I was staying. The WiFi dropped out every once in a while, and only reconnected after 30 - 60 seconds. My Macbook did not have similar issues, so it is definitely something with the hardware/software on this computer.

Thankfully I have not experienced this on other WiFi networks… yet. Nonetheless, I have bought an small TP-Link AC600 USB Adapter which I can use in situations like these. It does not exhibit the same behaviour.

Another irritating thing is that the Shift Key does not seem to register every time it is pressed. Every once in a while when I press it to type a capital letter, it just does not seem to work. It does not happen very often, but often enough to be irritating. I will keep an eye on this one.

Overall I am very happy with this laptop. It is small and lightweight, and the performance is pretty good for such a small package. Your requirements may vary, which may not make this a suitable option for you, but if you are also looking for good performance in a small package, then it is worth looking at.

If you are looking for proper, in-depth reviews, then I suggest one of the following: