As part of a process of limiting my exposure to Google products, I am migrating my photo storage from Google Photos.

First off, I think Google Photos is an amazing product. I have looked at various other alternatives, and nothing even comes close to it. Uploading photos from the phone is seamless, and finding any photo five or ten years later is ridiculously simple. You can search by the location, the content, photos of a specific person and Google Photos find it almost every single time.

The only other products that come close to it is Apple iCloud and Microsoft OneDrive. But, since the whole aim of this exercise is to get away from these big tech companies, I have to look elsewhere.

And thus comes my first realisation: moving away from these big companies is often going to be painful. Not just the process of migrating away, but the products that one replaces them with will often-times not measure up to the convenience and ease of use of the products by big tech.

I think that is how they trap us in the first place by creating products that work great. And that integrates beautifully with the products we already use.

Saying hello to an old friend

Long ago, there was a product called Flickr. Flickr was pretty successful at the time, but over many years it was acquired by various companies, and its fortunes seemed to have dwindled. I honestly did not even know they were still around, but it looks like an acquisition by Smugmug in 2018 has breathed new life into them.

After looking at various other alternatives, I finally settled on Flickr. My two main reasons were:

They also offer a map search, but it is a bit convoluted and not as easy to use as in Google Photos where I can search for “Taipei”, and it will locate all the photos taken in Taipei.

In any case, for me, the important part is that my photos are automatically uploaded to the cloud, and I can find them again later.

The first thing I did was to swap around the automatic uploads on my phone from Google Photos to Flickr. First, I ensured that all my photos were backed up to Google Photos and the photos deleted from my phone (as I did not want Flickr to re-upload photos already uploaded to Google Photos).

Then, I turned off the backup in my Google Photos app:

Next, I installed the Flickr app and enabled backup by selecting the Auto-Uploadr option from the menu: 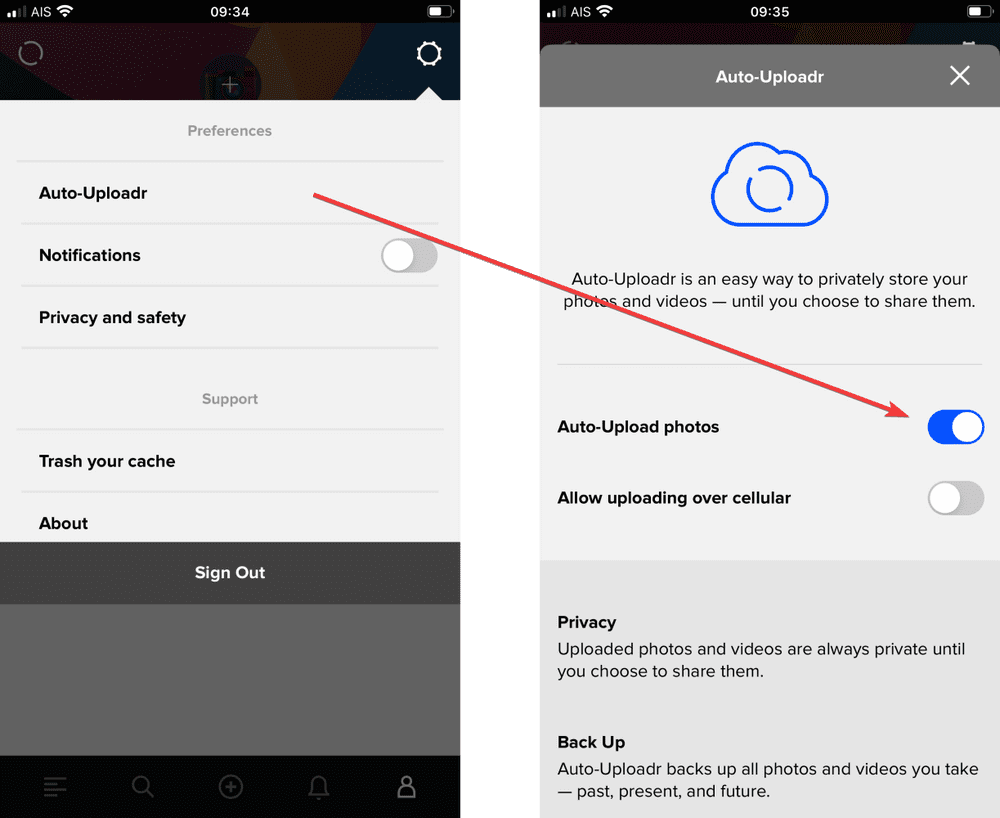 With the swapping of the automatic uploads on my phone, I was happy that all future photos would be backed up to Flickr, so it was time to migrate my old photos from Google Photos across to Flickr.

Google allows you to export all of your existing data by making use of their Google Takeout service. You can disable takeout of all products and then scroll down to Google Photos and select it only: 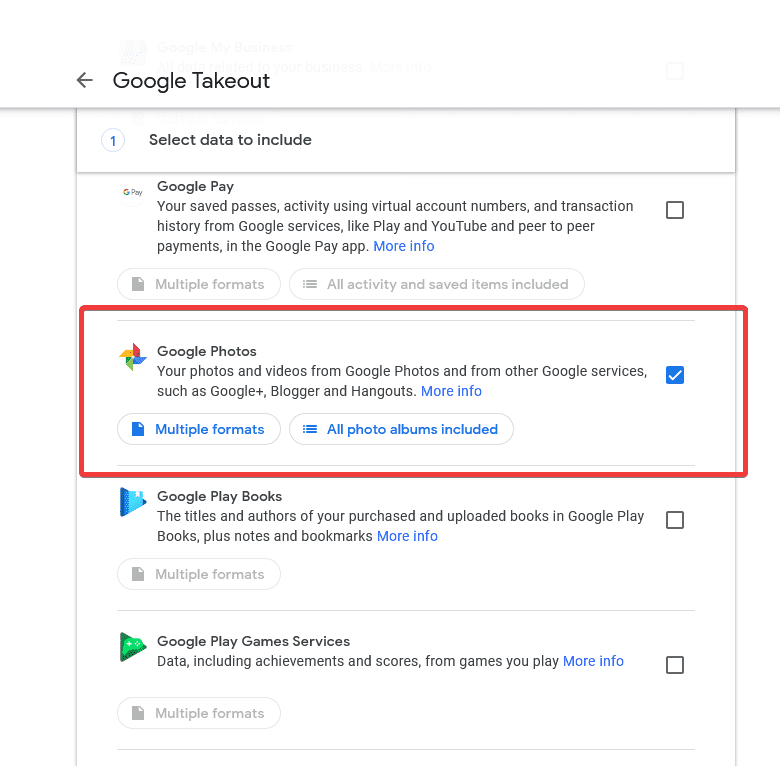 At this point, Google will ask you how you want to export the data. I chose to do a once-off export as a ZIP file and spread the data across multiple 2 GB files 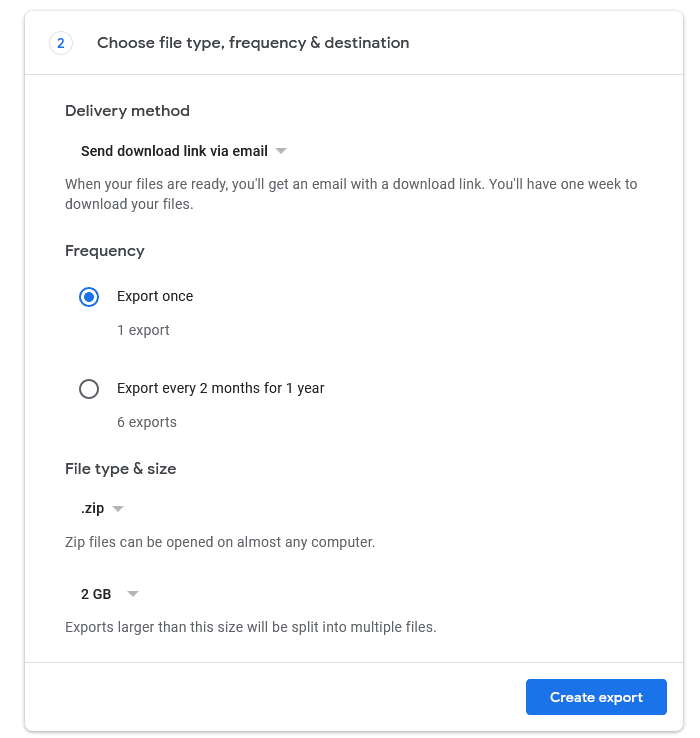 Once Google has processed your request (which can take hours or days depending on the amount of data you want to export), they will send you an email with links to the individual files. 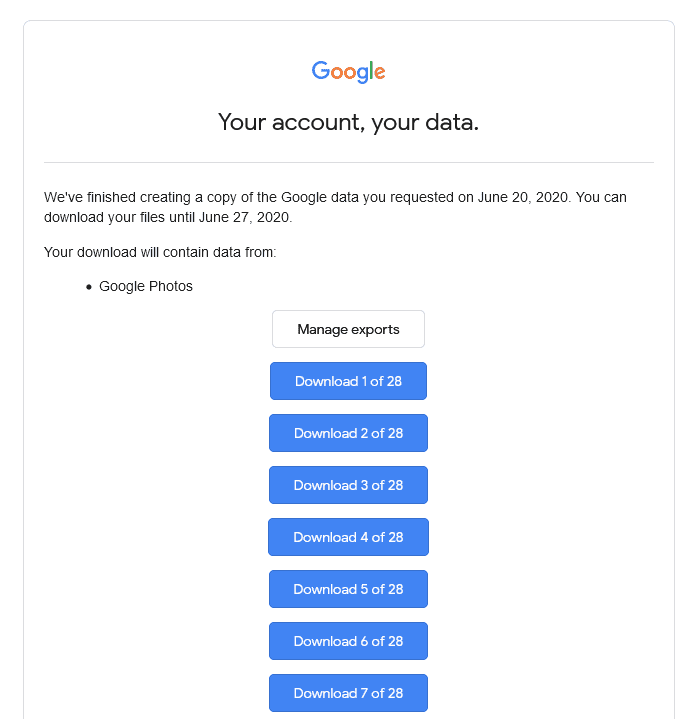 At this point, you can download to your local computer and extract them.

Once installed, you can point it to the directory where you extracted the photos from Google Takeout and leave it to do its thing. 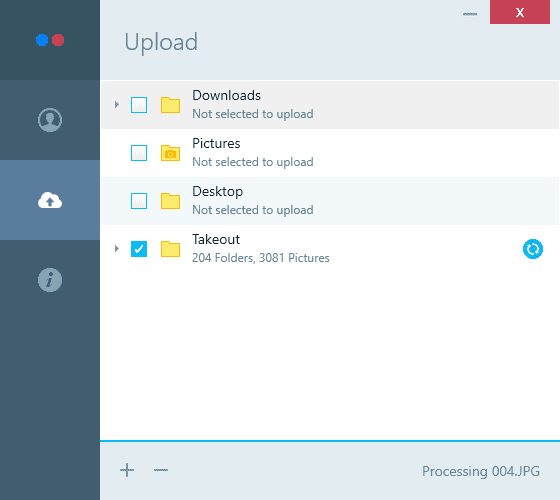 I processed the 28 files from Google Takeout in 3 batches. Altogether I migrated around 9,000 photos, and I started and completed the process on a Sunday. That included waiting about 5 hours for the Google Takeout to be ready.

In this blog post, I discussed my process of migrating from Google Photos to Flickr. Overall, I think Google Photos is the far superior product, but Flickr will be OK for my needs. And, most importantly, they’re not Google.