I am currently helping a friend on a project which involves a mobile application running on iOS and Android, with a backend API and supporting administration website which is developed in ASP.NET MVC and Web API. The application is targeted at an international audience and one of the requirements were that the application should support multiple languages.

I am responsible for the development of all the web related software and for the administration website I am using AngularJS with ASP.NET Web API, and also a few pages which are just plain old ASP.NET MVC.

I am pretty much familiar with handling localization of applications in ASP.NET MVC so I set off trying to find something which could handle doing translations for me on the AngularJS side. After looking at a few options I settled on angular-translate.

The documentation is very good and installing it is straight forward. A Nuget package is available, but it is not current so you may want to rather download the latest release directly from GitHub.

Angular translate supports various methods in which to supply translations for the different languages. You can specify the translations directly in your app, or you can load it asynchronously from an external source using one of the various loaders.

It was however not long before I ran into a few concerns. The first concern was keeping the various translation files in sync, and my second (and biggest) concern was the fact that even though I had solved the issue of handling translations for the AngularJS side of the application, I was still maintaining a completely separate set of translation files for the ASP.NET MVC and Web API side of this which was using normal .NET .resx files.

One of the other ways angular-translate can handle loading of translations is by loading it from a URL using the urlLoader. For configuring the urlLoader you simply need to supply a URL from where the translations will be loaded. When Angular Translate requires a translation set for a specific language, it will make a request to that URL and pass in a lang query string parameter which specifies the language requested.

The response from the URL must be a JSON object containing all the translations as key-value pairs, for example:

This seemed like a good solution to me as all I needed was to create a resource on my Web API which will read the translations from my .resx file and serve them up in the correct JSON format.

The resulting Web API method ended up looking like this:

I also want the user to be able to switch between the languages, so I created a controller which gives handles that:

The reason for setting the cookie is because my ASP.NET MVC backend will pick up this value and set the correct culture for the current thread at the start of each request. So in the Global.asax.cs I add the following method to my MvcApplication class:

So my very basic test application has a view which displays a greeting in the current language:

The first greeting is displayed using the normal ASP.NET MVC method to output the value of a string resource:

For the second greeting I use the Angular Translate translate directive to do the translation:

When you run the application you are initially greeted by a screen which displays a greeting in English: 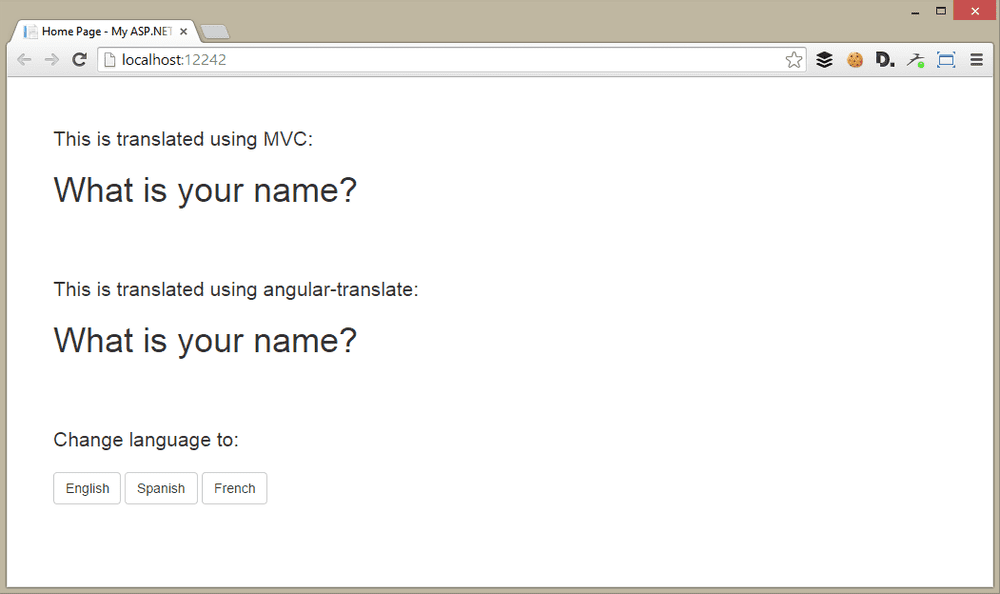 Clicking on the button labeled “Spanish” displays the greeting in Spanish: 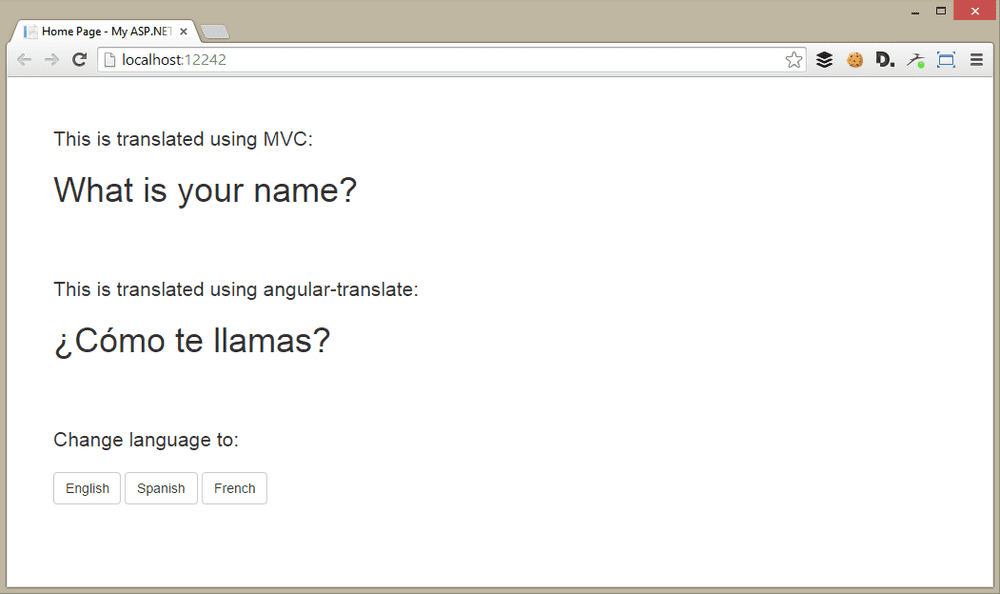 You will notice that only the Angular Translate greeting has switched to Spanish. This is because Angular Translate has made an AJAX request back to the server to fetch the Spanish translations and applied them to the elements with the translate directive. The ASP.NET MVC greeting is however still displayed in English as we will need to do a full page refresh to ASP.NET MVC can serve the Spanish translated view.

Pressing F5 so that the browser can do a full page refresh back from the server now displays both greetings in Spanish: 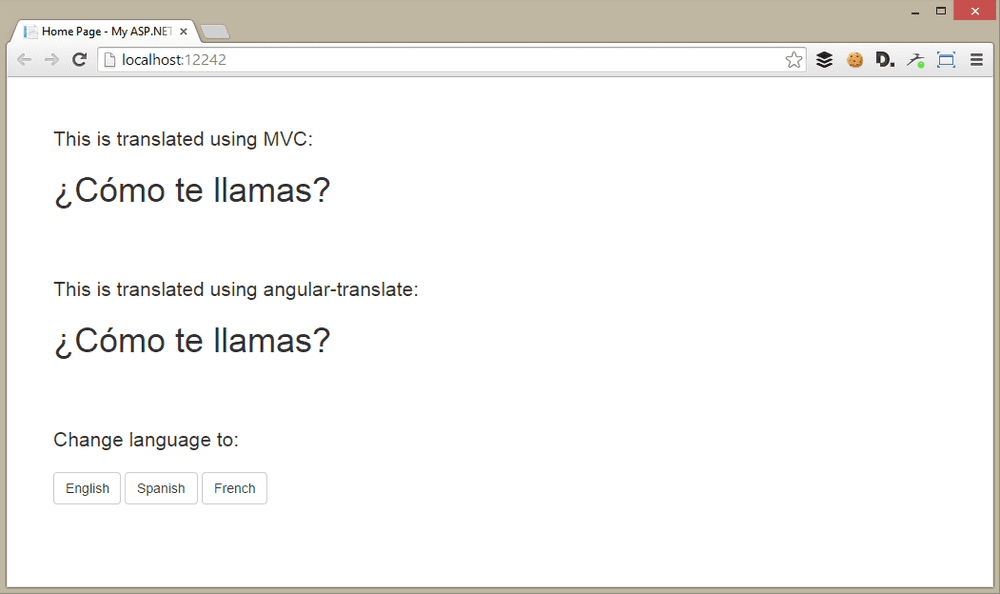 Since we are now maintaining the translations on .resx files there are a number of tools available which also makes the process of maintaining the different translation files much easier. One of the ones which I found quite effective, and is available for free is called Zeta Resource Editor. 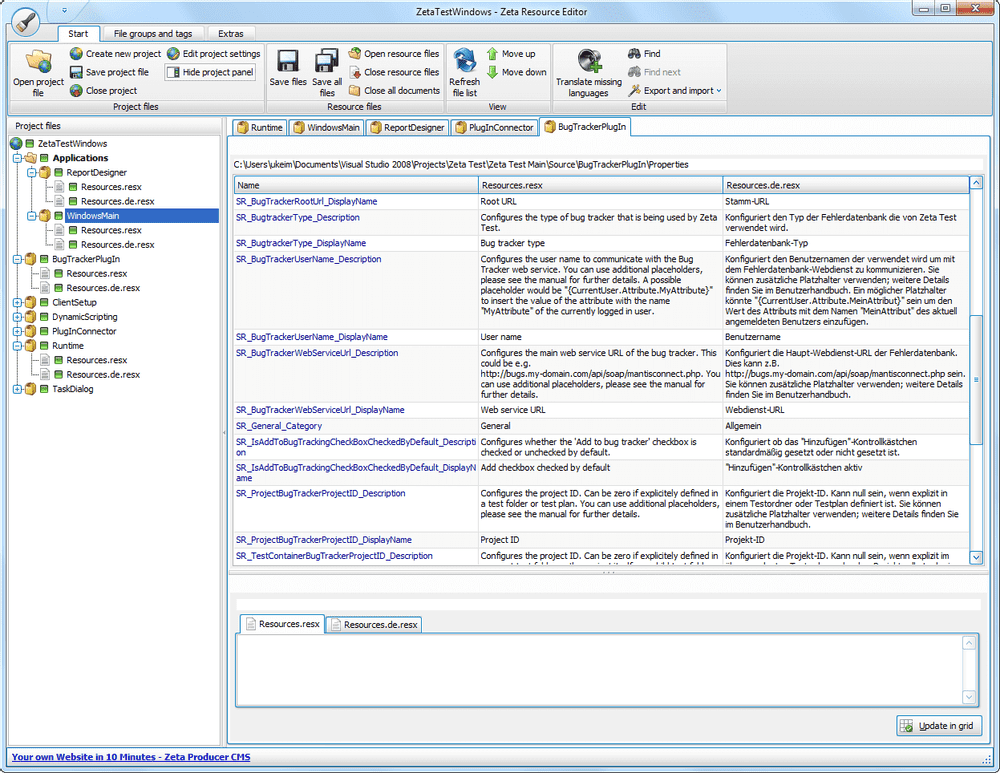 Zeta allows you to view all you translations in a single view which gives you a quick overview of which translations are missing. You can also change the name of a translation key quite easily and have it automatically applied to all the translation files.