Here is a great find: The JWT middleware in ASP.NET Core knows how to interpret a “roles” claim inside your JWT payload, and will add the appropriate claims to the ClaimsIdentity. This makes using the [Authorize] attribute with Roles very easy.

This is best demonstrated with a simple example.

First of all I head over to JWT.io and create a JSON Web Token with the following payload:

Note the array of roles in the “roles” claim.

This is an HS256 token and signed with the secret “mysuperdupersecret”, as can be seen in the following screenshot: 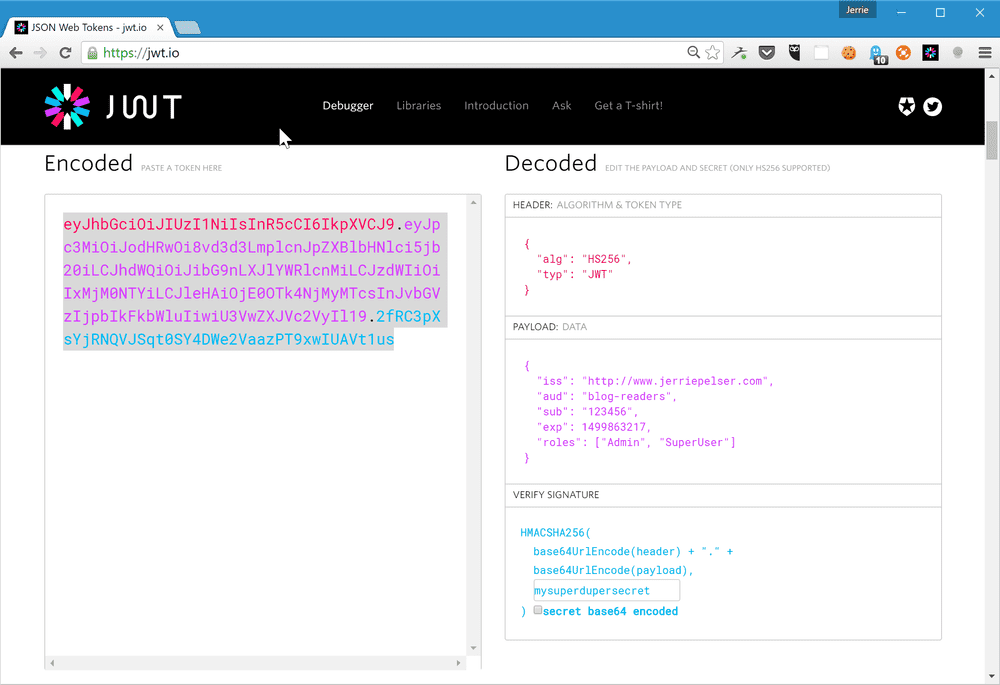 In my ASP.NET Core application I am configuring the JWT middleware:

When I make a request to my API with the JWT created above, the array of roles in the “roles” claim in the JWT will automatically be added as claims with the type http://schemas.microsoft.com/ws/2008/06/identity/claims/role to my ClaimsIdentity.

You can test this by creating the following simple API method that returns the user’s claims:

So when I make a call to the /claims endpoint above, and pass the JWT generated before, I will get the following JSON returned:

Where this gets really interesting is when you consider that passing Roles to the [Authorize] will actually look whether there is a claim of type http://schemas.microsoft.com/ws/2008/06/identity/claims/role with the value of the role(s) you are authorizing.

This means that I can simply add [Authorize(Roles = "Admin")] to any API method, and that will ensure that only JWTs where the payload contains the claim “roles” containing the value of Admin in the array of roles will be authorized for that API method.

What makes this doubly interesting is that this works with the OpenID Connect middleware as well. So in other words, if the ID Token returned when you authorize a user using the OIDC middleware contains a “roles” claim, the exact samle principle applies - simply decorate the MVC controllers with [Authorize(Roles = "Admin")] and only users whose ID Token contains those claims will be authorized.

So bottom line: Ensure the “roles” claim of your JWT contains an array of roles assigned to the user, and you can use [Authorize(Roles = "???")] in your controllers. It all works seamlessly.